END_OF_DOCUMENT_TOKEN_TO_BE_REPLACED

Search
We couldn’t find any results for your search.
Cart
Nothing here yet

Add some of our awesome products!

Go to store
Total
$0
VAT may apply
Go to checkout
Added to cart
You added to your shopping cart.
Go to cart

END_OF_DOCUMENT_TOKEN_TO_BE_REPLACED
2 products
added to cart
requires to run. Both products were added to cart.
Go to cart

END_OF_DOCUMENT_TOKEN_TO_BE_REPLACED
Already in cart
is already in your shopping cart.
Go to cart

END_OF_DOCUMENT_TOKEN_TO_BE_REPLACED
Warning
All products in cart () that require to run will also be deleted.
Confirm

END_OF_DOCUMENT_TOKEN_TO_BE_REPLACED

Try this
Motion 5 / FCP > Motion/ Final Cut Pro slow down or crash when using your product.

Final Cut Pro and Motion tend to stack corrupted data in their preference files which often results in an unexpected app behavior (instability, crashes, artifacts, extended render times, etc. Because of that, Apple's support (and therefore we) suggest wiping your preferences once in a while.

To clear your FCP or Motion preferences, launch the app while holding down the Cmd + Option (Alt) keys – click ”Delete Preferences” in the popup that appears. You may need to reopen your FCP Libraries via the File > Open Library > Other > Locate menu (they're the files with the .FCPBUNDLE extension saved by default in your Mac > Users > YourUsername > Movies folder).

After clearing your FCP preferences, we suggest disabling the Background Render feature – it continuously renders the timeline every time you change a parameter, so it tends to disrupt the general workflow more than it helps. You can turn it off via the top Final Cut Pro > Preferences > Playback menu. We recommend using the on-demand pre-render hotkeys instead:

If you'd like to increase your performance in FCP even further, we suggest switching your Clip Appearance to a minimized view, disabling Skimming and switching to the "Better Performance" mode: 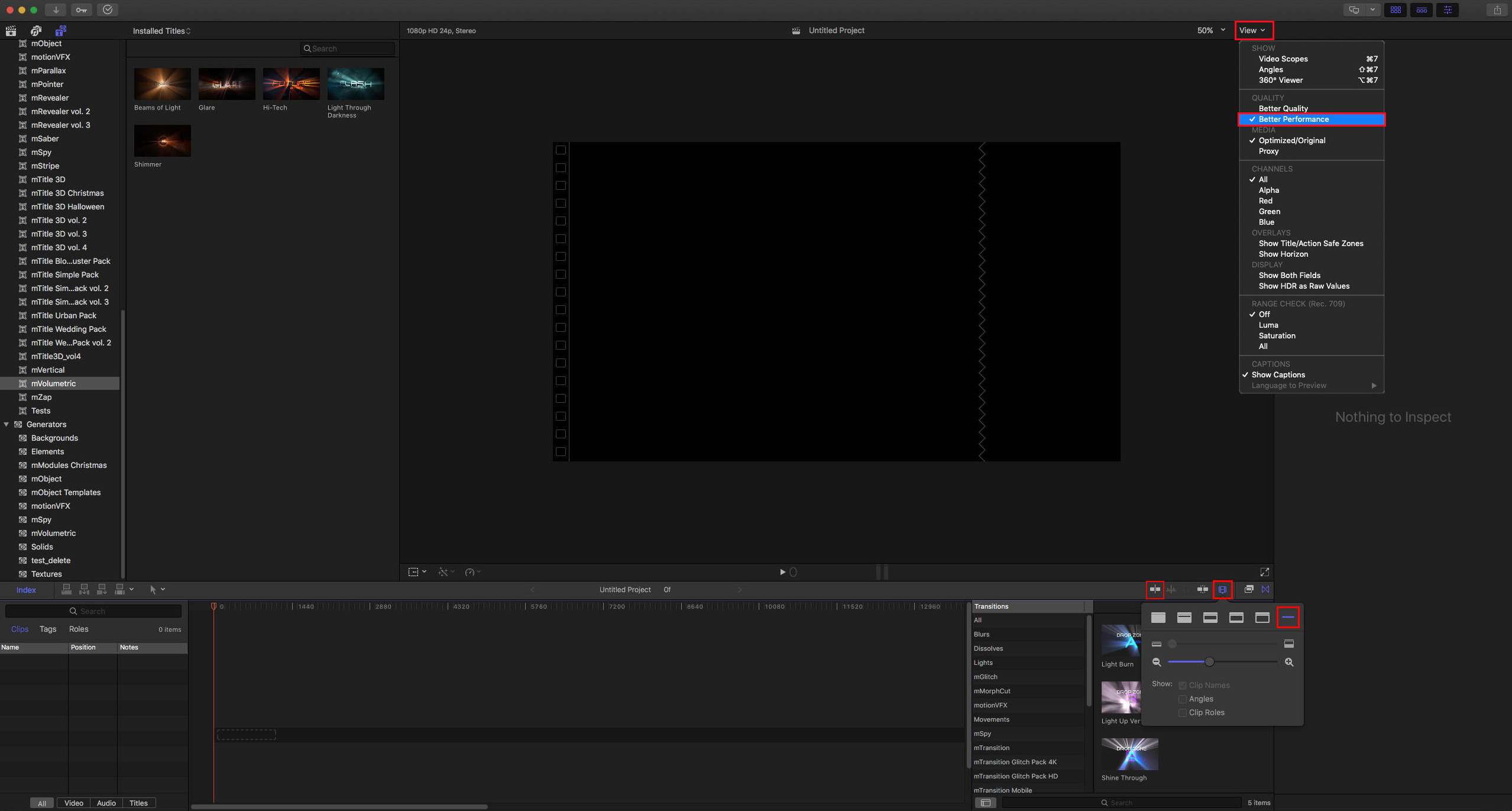 That said, rendering speeds in Motion 5 and FCP depend almost entirely on your Graphics Card (GPU). If your card's performance is not sufficient, then your host app may significantly slow down. This is especially the case for Macs that have only an integrated Intel graphics card installed (and no dedicated GPU e.g. AMD Radeon). Such machines were not designed to for editing purposes as their computing power is very limited which may lead to many issues (artefacts, unexpected app behavior, crashes etc.).

In such cases, the only thing that we can recommend is either switching to a Mac with a dedicated graphics card or upgrading your current machine with an eGPU.

Thank you for using our support system. Come back if you'll need anything else!